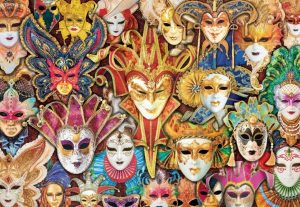 Masks are nothing new. They have been used in rituals and ceremonies dating to 7000 BCE.

Two widespread uses of masks dominate history and culture. The first is for festivals and ceremonies. Perhaps most commonly known is the Carnevale of Venice, Italy, rooted in the 13th century. Carnevale is also known as Marti Gras, famously celebrated in New Orleans here in the States. Historically this is the 2-week raucous festival of indulgence preceding the 40- day deprivation period of lent. During Carnevale, the usual expectations of desired social behavior are suspended.

It functions partly as a reversal ritual, allowing the primitive element of human nature to express itself.

The second usage is among legends and heroes: these characters conceal their true identity behind a mask to carry out deeds as vigilantes on behalf of the greater public good. The first examples emerged in the early 1900’s:

Zorro was the alter ego of Don Diego de la Vega during the Spanish colonial period. He defended commoners and indigenous people of California. During that same decade we were also introduced to The Scarlet Pimpernel: chivalrous Englishman, Sir Percy Blakeney, in the Time of Terrors in France.

Garnering a cult-like following in the late 1980’s from the film, The Princess Bride, The Man in Black operated as alter ego for Westley: simple farm boy turned pirate – in love with Princess Buttercup. While clumsily and half-heartedly combatting Westley, the benign giant named Fezzik inquires, “Why do you wear a mask? Were you burned by acid, or something?” Westley prophetically replies, “Oh no. It’s just they’re terribly comfortable. I think everyone will be wearing them in the future.”

These masked figures share certain traits: they have a signature weapon, usually a sword, which they employ with expert prowess. They are physically agile and skilled escape artists. They are intelligent and able to outwit their foes.

Now that masks are mandatory for all, they are used (or not used) as fashion and political statements. The overarching question is this: Hedon or Hero? Will we draw upon our best selves to unite widely, ensure Black Lives Matter, heal deep grief, cultivate diversity, equity, inclusion and belonging? Will we surrender to our more savage nature and breed mistrust between communities; depend racism and hatred? The answer to that is still an individual choice.