“As you will find in multivariable calculus, there is often a number of solutions for any given problem.” 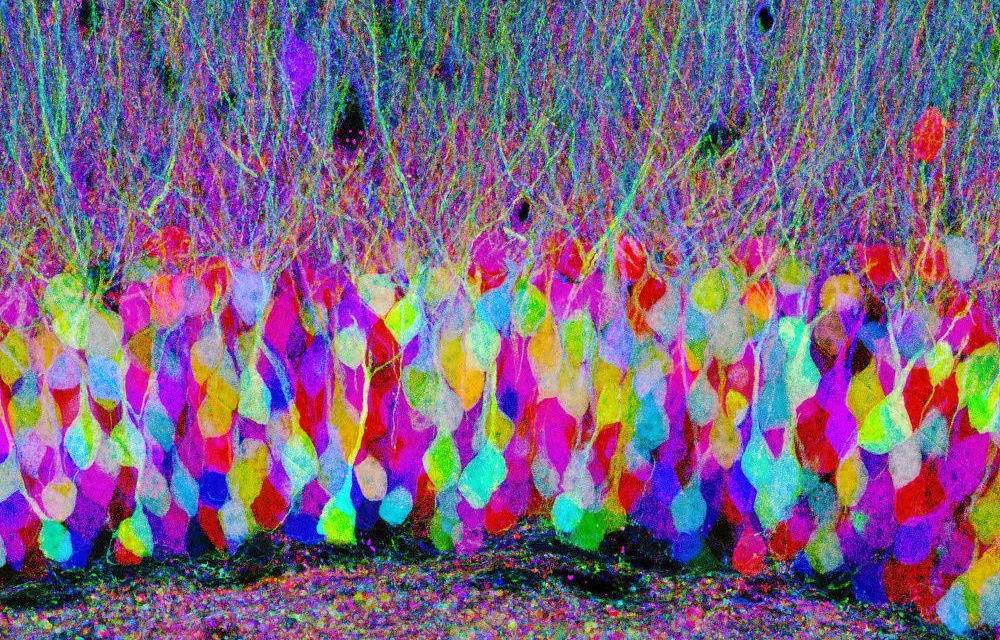 About the Brainbow Image:

A Harvard research team, headed by Jeff Lichtman, duplicated the way that a television monitor uses varying amounts of just three colors (red, blue, green) to produce a huge array of resultant hues. They have applied this technique in the brain using fluorescent cyan, yellow, and red pigments–varying amounts of which can produce 90 possible color combinations to label individual neurons. Through genetic recombination, pigment-expressing genes are inserted into the genomes of developing mice. The result is the “Brainbow” mouse, whose individual neurons express the three pigments in a random pattern making it quite useful for tracing and visualizing them in later experiments.  These images, in addition to being scientifically informative, are elegant and aesthetically beautiful.

The compartmentalization of art and science is a rather arbitrary one. Ages ago, educated people (think Leonardo da Vinci) were often artists AND scientists and the pursuit of knowledge and fact fed into their desire to understand aesthetic beauty and the creative process.

At Pactum Factum, our mission is to leverage science and law to inform the art of negotiation and dispute resolution resulting in a process that can breed elegant, durable, creative and practical outcomes.

We are specially trained with the world’s most recognized and respected dispute resolution leaders and programs.

We have delivered a variety of programs, including ½ day, 1 full day,  2-day or 1-week workshops encompassing many topics.

At Pactum Factum, our mission is to leverage science and law to inform the art of negotiation and dispute resolution resulting in a process that can breed elegant, durable, creative and practical outcomes.

Our investigations are impartial, thorough, prompt, and appropriately customized for the circumstances.

Our Conflict Resolution/Peer Mediation Project uses a program designed by the CRU Institute.

“Lucia has worked with our organization since 1997 and has brought innovative and practical ideas to policy, process and funding. Lucia exudes intelligence and warmth. She is deeply thoughtful, cool under pressure, and always gives 150%.”

“Lucia’s attention to detail is awesome. She really listens and pays attention. She notices not just what people say, but what they don’t say – the information presented and also what’s missing. She understands people better than they understand themselves. Beyond her smarts and professionalism, Lucia is also a genuinely great person.”

“Lucia was masterful at ascertaining the core of the problem and making the parties feel that they were heard and understood. She knows how to get people unstuck from positions and thinking productively. In short, she can teach you how to operate (in business and in life) in smarter ways.”