Sedition and Neuroscience: The Myth of Rationality 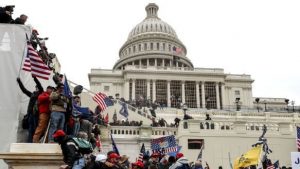 Abstract: Events in our Nation’s Capitol not even a full week into 2021 have sparked numerous articles, discussions, and questions about the crises of our country, the divisiveness of its people, and human nature in general. This Primer in Neuroscience, Emotions and how they impact decision-making and human conduct when in crises may help demystify the myth of rationality to gain an understanding of why people in conflict behave the way they do.

As a mediator, I work with people in conflict – and who have been in conflict long enough that they have decided they need my help. I am not a neuroscientist. But a basic understanding of the crossover of neuroscience and dispute resolution can lead to new breakthroughs working with disputing parties in mediations, and also in engaging with people generally in the world – especially now, especially when crises is the status quo for so many people.

Decision making
Risk assessment
Rational cognition
Focus
“Working memory” (how much information a person can hold, process and use at any given moment)
Perception of “Threat”

The emotional and physiological response is by and large the same for both physical threats (a snake) and emotional threats (“she’s going for full custody of the kids”), and the cognitive response toggles between 3 fundamental levels of functioning: Reptilian (fight or flight, the neural networks related to fear/survival – a very durable network); paleo-mammalian (social bonds, decisions); Neo-cortical (high level executive functions).The exercise of law, engineering, accounting, science, etc. is a neo-cortical activity, but decision-making is a sub neo-cortical activity. So, when someone suddenly shifts position and we think they are acting “irrationally,” it’s that a different part of the brain (the non-executive part) has taken over. The same can be said when the opposite happens (as has become common with accusations of “fake news” and abounding conspiracy theories of late): someone refuses to shift their mindset, even faced with objective facts to discredit their original opinion or position (see this Blog’s 6/1/2016 piece on “Confirmation Bias”). Even the common act of getting angry at one’s kids is a core relational theme (more on that below) leftover from the Reptilian brain (“my progeny is in danger and I need to act”). But if the Executive / higher brain reappraises in time, it can ask whether anger or fear or maligning the other person is really the appropriate response to the situation. Think of how different our interactions might be, and how many explosive situations might be defused, if more of us recognize when this is happening.

Although we are wired to cooperate socially and to bond, we are very reactive to threats, and the brain has a Negativity Bias: this means the Sympathetic nervous system lights up like a Christmas tree at even a whiff of a threat, and that “sticks” are more impactful than “carrots!”

Consider for a moment your Amygdala hippocampus system (labeled in 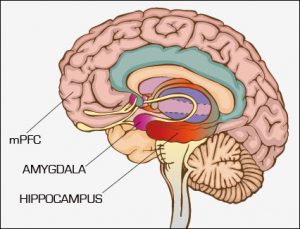 the image to the right). It is primed to label experiences negatively and will flag a negative experience prominently in the memory. With ambiguous communication, this means that IF a negative inference can be made, it WILL be made, in lieu of a positive interpretation. The negativity bias is so robust that it takes 5 positive interactions to undo a single negative one. Thus, people will do more to avoid a loss than realize a gain; and the Avoid system is routinely hijacking the Approach and Attach system. The result of threat reactivity is that people in a dispute overestimate threat and underestimate opportunity in their initial appraisals. If nothing or no one (such as a mediator) helps them reappraise that the snake is a stick, the brain continues to pump cortisol and reinforce stress. This happens in everyday situations, not just in national news when a mob of thousands storms the Capitol (is anyone remembering an argument with your spouse or significant other at this point?) The cost of not steering people towards reappraisal is that actions and decisions while feeling threatened lead to over-reactions, which causes other people to feel threatened, and a vicious cycle ensues. The Approach system is inhibited, thus limiting options and opportunities.

*Take away: it is more likely that people will deviate from rationality than be consistently rational. Recognize how powerful it is to know how to identify which part of the brain is working, when and why. Mediators use active listening, reframing, and timing of breaks to help the people’s brains reappraise and stop the vicious cycle. So can you, with practice . . .

A brief word on the role of emotions:

Here is what I have learned from my 30+ hours of training from the Paul Ekman Group and Dr. Ekman’s book Emotions Revealed: Core Relational Themes inform how we deal with people in the world. Our cell assemblies have, over thousands of years, created a sturdy emotion alert database. This database serves an important purpose:

FEAR protects us; our lives are saved because we are able to respond to threats of harm protectively, without thought.
DISGUST reactions make us cautious about indulging in activities that literally or figuratively might be toxic.

SADNESS and despair over loss signals to others that we may need help.

Even ANGER is useful; it warns others, and us as well, when things are thwarting us.

Probably the most important nugget I learned from Paul Ekman’s book Emotions Revealed is the concept of the Refractory State – this is the time during which our thinking cannot incorporate information that does not fit, maintain, or justify the emotion we are feeling. For example, have you ever tried to apologize to someone while they are still mad at you? It’s futile. A Refractory State lasts an average of 20 minutes, and the person experiencing the strong emotion simply cannot take in any new information until the refractory state has passed. Recognizing a refractory state can be key in terms of what you do next. When you identify the refractory state, understand that the Executive level of the brain is not operating during this refractory period – and it may be wise to step away from the immediate situation to take a break.

Take-Away: Rationality is a myth. Instead, human behavior and circumstances are predictably irrational (the title of another book I recommend, by Dan Ariely). Rational choice theory is but one approach to conflict, and not necessarily the most effective one where emotions, distrust and suspicions simply cannot be suspended even among people of good will and reason. With even a simple understanding of neuroscience and emotions, anyone can learn to manage the human experience effectively and without relying upon faulty and insufficient ideology of how one “should” behave or “should” approach conflict and decision-making.