What LinkedIn Wouldn’t Let You See

On Monday September 12, 2022, I posted the following on LinkedIn. 2 days later, it was removed by LinkedIn and I received a message that it violated community standards. So, I posted this image of their reprimand of me, which generated quite a bit of traffic and requests by people to see the content of the original post. Here is that content:

They labeled me a Disruptor. Well, WATCH ME LEAN INTO THAT 🦸🏻‍♀️

The year was 2021. I’d been practically begged to be President/CEO of a very male dominated sports organization (picture the last bastion of White male privilege in your mind’s eye – yep, that’s the place!) and I ended up being formally reprimanded by a secretly assembled conduct committee for . . .

(really, prepare to react with shock & dismay at my atrocious behavior) . . .

once (allegedly) dropping the F-bomb in a board meeting. (click here to watch scene. 2 minutes to watch. “The” moment is about a minute and 5 seconds in)

And here’s what definitely NEVER happened at that place by the men with no repercussions:

✓dropping F-bombs in meetings every 6 minutes or so (“just locker room talk”)
✓drinking so excessively that they whipped “it” out and urinated on the wall (“boys will be boys,” 🤷🏻‍♀️)
✓inebriation to the point of passing out in the parking lot (“hey, it happens!”)
✓breaking into a fight and punching a hole in a manager’s wall (no comment)
✓arrested and jailed overnight for public drunk & disorderly conduct and then boasting vocally about it within the organization (he’s still on the board. no reprimand.)
✓referencing “going home and getting my gun” if the women didn’t quit being so “entitled” with their demands of equitable treatment (also still on the board!)
✓(I’ll need to do this in installments because the list of things definitely an invention of my overactive imagination by others in leadership exceeds the character limit)

But ONE woman allegedly drops ONE F-bomb in ONE meeting and it’s the end of civilization as we know it. AND THEN THEY OUSTED ME.
(Is this the “whole story?” Um . . . not even close, sports fans!)

Yes. It’s true. If you’ve been wondering who’s responsible for the degradation of humanity: it’s ME! 👿

I must have deserved it, right? (And do you wonder what caused me to (allegedly) drop said F-bomb . . .?)

Can I get a “Oh HELL NO, Lucia!” in the comments? (It really deserves an F-bomb, but I wouldn’t want you to be reprimanded by LinkedIn)

NOW FOR THE PUNCHLINE: Without their ousting me, I wouldn’t now have my role with UN Women; wouldn’t have started my podcast; wouldn’t have written my SEXY, SPLASHY, SMART un-put-downable Robert Cialdini-endorsed / NPR interviewed book about to release (see chapter 15: Negotiating with Bullies).
Sneak peek here: https://lnkd.in/ghcQQiP2

They thought I wouldn’t survive the storm? I AM THE STORM, FELLAS!

They really should have played nicer (see chapters 2 and 15). 😠

That letter of reprimand is a badge of honor. If you’re someone to help display it on a billboard on the CA-101 freeway, DM me.

The Jazz Session (15 minutes to listen)

My blog has gone quiet lately because I’ve been so busy with my podcast, and bringing my truly sui generis book to the market (public release date 10/01/22 and sneak peek here) 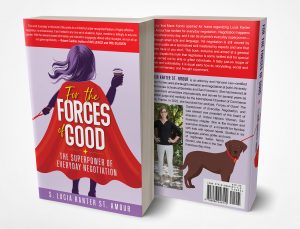